The beach cottages in Grayton Beach, Florida, were deemed by the planners of Seaside as vernacular examples for architects to emulate. Along with the many other distinct styles found through out the different regions of the south; such as the “side loaded row houses” of Charleston, South Carolina, were the influence of early Seaside. The Grayton cottages however, were indigenous examples of the architecture for our design inspiration.  Indeed many of our early designs for our clients in Seaside were greatly influenced if not down right stolen for their simple forms and their humble materials. We admired the human scale and unpretentious quality of Grayton but most of all it was the authenticity of the beach town that we found most livable. This unexpected, eccentric, unplanned and eschewed quirkiness made Grayton Beach perfect for us as opposed to a “planned” community which was not the goal of Seaside.

Here are some of the houses of Grayton Beach as shown in these photos shared by Dawn Thornton, Amy Hughes and Sarah Kay Hughes. You can see more on the Facebook page of “Summer Memories of Grayton Beach in the 50’s and 60’s” here,

These houses are still much the same except for paint, mature vegetation and of course all of the necessary modern up grades.  Here are a few samples of the original cottages as they appear today. Please click on the highlighted text to view the VRBO site for further information.

See more of the history of the Butler family and Grayton Beach’s origins here.  For more reminiscences of bygone days visit here.

The “Dog Trot” house plan is a open center hall or breezeway with rooms open on to the breezeway. The combination of this breezeway and open windows created air flow in the pre-aircondition era . This house in Grayton is a rare two story version of a dog trot. The house was moved a short distance to its present location in 1999 but originally the house was one story and raised to create living space above the open breezeway. The front upper floor was a porch and then converted to enclosed bedrooms.  (see Hibiscus House for more rental information and history)

Moving day for the old gal.

The “Washaway Hotel” is only a few hundred feet from the Gulf of Mexico and has been raised up on pilings for the obvious reasons of encroaching storm waters.

Renamed as “‘A Grayton Tradition’ “The Washaway” is a historic beach house and a local treasure located in the heart of Grayton Beach. Built in the late 1800’s by Capt. Gray and later used as the Coast Guard Headquarters for a cavalry unit during WWII, this home survived a major hurricane in 1926 (but was almost washed away), as well as standing strong during Hurricane Eloise in the late 1970’s, and Hurricane Opal in the fall of 1995. ”

There are several more houses I would like to explore further here and if I can I will include in my next post.

In this letter Tom describes to me the brilliant aqua and emerald color of the water and clear cloudless blue skies and this still rings true today.

In the beginning a Butler beach cottage is where Tom was housed by Robert Davis in the few months before I was able to join him from Miami. The cottages did not have a telephone, television, air conditioning, barely running water, and it was without insulation in the winter months with only a small room size heater. He LOVED it! Those cottages are long gone, replaced with huge “modernized” McCottages now, and very few examples are left of the original vernacular cottages of old Grayton.

Their names are Butler, Florence, Patterson, Eyer, Belcher, Cannon, Taylor, Haynes and a handful more that made up the early families in Grayton Beach, Florida, when this letter was received by me, from my husband Tom, and it was those families which welcomed us into the fold of the small beach hamlet nestled in the dunes. When friends asked us where we had moved, we had to always describe our little corner of Shangri-La as somewhere between Jacksonville and Pensacola and work towards the “between Panama City to Destin” location. It’s no longer necessary to give this descriptive location as 30A has been found! 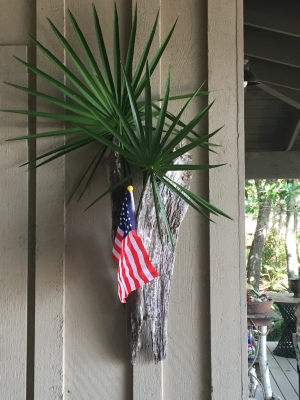 The orchid in a natural cypress stump vase

Somewhere along the line I developed a obsession with “God Art.” To me God Art is anything from nature used for a purpose or simply for art’s sake. Driftwood is one of those natural elements that fascinate me.

It all began when our friend Jake Ingram, a landscape architect and all around cool person created an Andy Goldsworthy-inspired stick beehive sculpture on the trail to the beach where we lived in Little Redfish. Our son Matt was 6 at the time and when he came across it with his father on one of their jogs, he ran all the way back home for some paper to leave a note thanking the artist for the “God Art.” At the time we did not know Jake was the artist and needless to say Jake has gotten a lot of mileage out of retelling this story.   So, you see it’s really all of Jake’s fault that I have this obsession and I blame him squarely for exposing me to the beauty of found bird nest’s, discarded snake skins, jewelry made from raccoon penis bones, (see Gogo jewelry here) and twisted dune sand pines, to name a few of God’s art projects.

In as many as I can of my interior project I will try to convince my client into incorporating some natural elements. If it’s just adding fresh palmetto fronds at the entry or a whole room of pecky cypress paneling, these elements speak to our area’s natural beauty and defines our sense of place.

Over the past few years driftwood has become quite popular and many have found beautiful uses for displaying their beach “finds”.

This may be old news to some of my friends as these light sconces are in my own home, but I feel it’s important to share them here as an example of what necessity can breed. My hand blown art glass sconce shades came loose from their connections and came crashing to the floor; leaving the light fixture “guts” still intact on the wall. What’s a gal to do when your budget is tight and you can not seem to find a suitable replacement? Answer: make it yourself!

I wish my photos were better quality, but hopefully you will be able to imagine and see the meaning of the posts. I guess they are not bad for a iPhone6 edit manager.

It started for my husband, Tom, and I some 35 plus years ago on a short visit to Seagrove Beach, Florida to search out the fledging town of Seaside, Florida. As very young designers from Miami, we had an interest in the possibilities the area could afford our craft and life together. We visited with Robert Davis and listened to his exhortations of what the dream was to become. At the time, the dream begged disbelief because the “town” of Seaside and the surrounding areas seemed to us city-slickers as nothing more than a series of dirt roads. But there was something romantic about those dirt roads that all led to the emerald waters of the Gulf of Mexico and the snow-white sand of the beach. It’s little wonder that we couldn’t shake the idea of the New Town with the Old Ways, and within two years we returned to find out how this dirt road would shape our lives, forever.

The year was 1984. Tom was the town architect of Seaside. I was trying to keep possums from clawing their way through the shower wall (true story–but better told another time). We both worked out of the Tupelo Street pavilion, in what are now bathrooms. Tom with a drafting board and bumwad paper with his desk facing the Gulf.  And I with the same setup but looking toward 30A. I would watch the same red pickup truck travel east along 30A early in the morning. When the truck traveled back west in the late afternoon, I’d yell over to Tom that it was quitting time for the day.

Eventually, Tom would design over 90 homes in Seaside. I ended up designing the interiors of many of those homes.  Along the way, we ended up designing our own life along 30A:  First in Seagrove, then a slightly larger home in Grayton Trail to accommodate an addition to the family–our son Matt–and then later a home on Little Redfish Lake, until we finally decamped to “the Bay House” where Tom and Matt’s water toys could be easily accessible in the backyard (aka the dock).

Along the way we realized that those early dirt roads were not just dirty, oyster shell roads. They connected us to other recent transplants and natives, and we realized that the area that’s become known as “30A” was special not just because of its serene, natural beauty, but because the diversity of its residents: From the visionaries to the bullheaded, from “lifers” to newbies, you never knew who you were talking to and could safely assume that everyone was related. Because, in a way, we all were. In the early 1980s, those who were discovering Seaside were building a community together. Friendships formed. Bonds tightened. A community-wide family was created.

Provenance is defined as “the history of ownership of a valued object or work of art or literature.”  30A and the communities that dot the scenic road, and those who have built their lives on that road, are the valued work of art. This blog is the gradual recounting of how the art of 30A came to be. It’s just one version of history; no doubt there are countless others. But in this blog, I hope to offer my observations on how my coastal home along 30A represents the lifestyle and attitude found only along 30A.